Inauguration Day in the United States of America ~ blog

Now before you go and unsubscribe from my daily emails/podcasts because I am taking today to not write about sexual addiction let me suggest a better option. Here is the link to almost 3000 emails of encouragement and podcasts for you to choose from.

It is not like you don’t have anything to read or listen to that will help you in your recovery. However, today is a very important day in the lives of all Americans regardless of who you voted for or what political party you align yourself with.

So, if you need to stop reading go ahead. Unsubscribe if you feel the need…however, I have some things that I want to say about the importance of this day in the life of our nation and the impact our nation can have on the world going forward.

I have seen good and bad presidents come and go. I have seen 3 impeached for various reasons and am thankful for our Constitution and the wisdom of our forefathers. Our democracy has remained strong through it all as the transition of power from one party to the next has been carried out respectfully and has been a model to the world in that it has been done peacefully and with respect.

We have survived a Civil War which, like all wars, had nothing civil about it. Over 620,000 Americans died in the battles with half of those dying off the battlefield from disease and wounds. Historians believe that the death toll is much less than the real total of deaths.

Today we find ourselves a nation divided not because of who has been in the White House but because of what has been in the hearts of many. Racism has always existed not only in our history but throughout the history of the entire world. It did not begin with Trump and did not end with Obama.

Racism will continue until God Himself ends these days of a sinful nature in every person, removes demonic influences from this world, and destroys everything with fire only to remake the entire planet. There will be an escalation of war, violence, and suffering, unlike anything anyone has ever seen. Seven years of time called the Great Tribulation when evil will run rampant directed by a man known only as the Anti-Christ. And oh…by the way…getting the Covid-19 vaccine is not getting the mark of the beast.

So, in light of what has happened over the past several years and even the past several decades, as believers, we have a role to play in this world that seems to be headed in the wrong direction. Paul tells us in Galatians 2:26-27 words that all Christians need to live by;

“So, in Christ Jesus you are all children of God through faith, for all of you who were baptized into Christ have clothed yourselves with Christ.  There is neither Jew nor Gentile, neither slave nor free, nor is there male and female, for you are all one in Christ Jesus.”

Also, Jesus Himself spoke these words to His disciples on their last night together before His death…

I hope you would join me in praying today for a number of things. Pray that Christians will begin to not only love one another but to also love our enemies and pray for those who persecute us.

And I pray for Donald Trump and his family. I believe there will be difficult days ahead for them. Wouldn’t it be a great thing if Jesus were to meet Donald like He met Saul on the road to Damascus? Imagine the power of that testimony and what it might be able to do in his life, in his family, and even in the world.

I hope you will join me in praying for peace today and in the weeks and months to come. I also pray that justice will be done according to the laws of our nation and hope we can move forward building a better society where more people can experience one nation, under God, indivisible, with liberty and justice for all.

John Doyel
This ministry began in 2009 with the expressed purpose of providing a support and recovery group that emphasizes not only the healing power of God but also, the personal responsibility of people to do whatever it takes to live a life of purity.
Recent Posts

RSS Feed
Thank you for your support 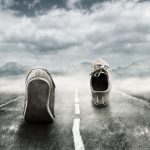 FINALLY!!! How to be Daily Walking in the Spirit ~ blogDaily Encouragement